If Radiographic procedures continue to be utilized in the future for analysis and measurement related to spinal care utilizing various techniques, then x-ray procedures need greater standardization among providers. A proposed project will compare the various techniques utilizing biomechanical analysis and manipulative procedures. The project will seek to identify those clinical practices that are most common and seek to identify those procedures with the greatest inter and intra practitioner reliability. Improved research to help determine the most effective and safe radiographic techniques to accurately measure spinal deviations that may be helped by manipulative care will be assessed in the next project. The information below is general X-Ray basic information on obtaining spinal radiographs.

Common technical procedures and tips for clinicians and their staff in taking radiographs. Topics from shielding, collimation, positioning and technique are shared.

X-rays are also referred to as radiographs or roentgenograms named after W. Roentgen. Conventional x-ray imaging has evolved over the past 100 years, but the basic principal is still the same as in 1895. An x-ray source is turned on and x-rays are radiated through the body part of interest and onto a film cassette positioned under or behind the body part. A special phosphor coating inside the cassette glows and exposes the film. The resulting film is then developed much like a regular photograph. It is the special energy and wavelength of the x-rays which allow them to pass through the body part and create the image of the internal structures like bones of the hand. As the x-rays pass through the body they are attenuated or weakened by the different density tissues they encounter. Bone is very dense and absorbs or attenuates a great deal of the x-rays. The soft tissue around the bones is much less dense and attenuates or absorbs far less x-ray energy. It is these differences in absorption and the corresponding varying exposure level of the film that creates the images which can clearly show broken bones, clogged blood vessels, cancerous tissues and other abnormalities. Structural integrity of the skeleton are also visualized

There are two basic ways to create images with x-rays. One method is to pass an x-ray beam through the body section and project a shadow image onto the receptor. The second method, used in computed tomography (CT), employs a digital computer to calculate (reconstruct) an image from x-ray penetration data obtained by scanning a relatively thin beam over the patient's body. At this time, we consider only projection imaging, which is the basic process employed in radiography and fluoroscopy.

The contrast and visibility of objects that ultimately appears in the image is developed in steps and determined by many factors, as illustrated below. 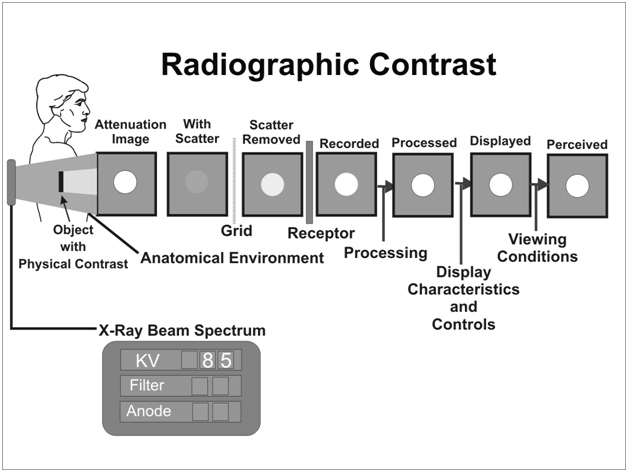 In addition to the x-ray penetration characteristics to be considered in this chapter, image contrast is significantly affected by scattered radiation (Scattered Radiation and Contrast) and the contrast characteristics of the receptor and display system. (Film Contrast Characteristics). Also, the contrast of small objects within the body and anatomical detail is reduced by image blurring (Blur, Resolution, and Visibility of Detail and Radiographic Detail).

As the x-ray beam emerges from the patient's body it contains an image in the form of variations in exposure across the image area. This is formed by variations in the attenuation through different parts of the body. In this attenuation image contrast is represented by the amount of variation in x-ray exposure between points within the image; the amount of contrast produced in a specific examination is determined by both the physical characteristics of the body section and the penetrating characteristics of the x-ray beam.

In this chapter we explore the characteristics of both the objects within a body and the x-ray beam and show how optimum image contrast can be achieved.

Several types of contrast are encountered during the process of x-ray imaging. The formation of a visible image involves the transformation of one type of contrast to another at the different stages in the image-forming process, as shown in the illustration above.

The x-ray images are captured by the receptor and recorded in some form. This can be on film, or on phosphor plates or some digital media for digital radiography. A desirable characteristic of radiographic recording methods is that all of the contrast in the x-ray image is fully recorded.

Both the phosphor plates and direct digital recording methods generally capture and record all of the contrast in the x-ray image because of their wide dynamic range for exposure.

One of the limitations of film for recording x-ray images is its relatively narrow exposure latitude or dynamic range. Image contrast is reduced or completely lost when the exposures are not well within the film latitude.

Both images recorded on film and digital media undergo some form of processing before they are displayed as visible images.

One of the great advantages of digital radiography is the ability to perform digital processing to enhance image contrast for specific clinical applications.

The next type of contrast is the contrast that appears in the visible image. The contrast in a radiograph recorded on film is in the form of differences in optical density values between various points within the image, such as between an object area and the surrounding background.

The contrast in an image on an electronic display or monitor (digital radiographs, fluoroscopic images, etc.) is in the form of different brightness or brightness ratios between various points within the image area.

Most systems for displaying digital images provide the capability for windowing. This allows the user to adjust and optimize the contrast in the displayed image.

The amount of scattered radiation is generally proportional to the total mass of tissue contained within the primary x-ray beam. This is, in turn, determined by the thickness of the patient and the area or field size being exposed. Increasing the field size increases the total amount of scattered radiation and the value of the scatter contrast-reduction factors. Therefore, one method of reducing scattered radiation and increasing contrast is to reduce the field size with x-ray beam collimators, cones, or other beam-limiting devices, as illustrated below. This method is limited by the necessity to cover a specific anatomical region. However, in most situations, contrast can be improved by reducing the field size to the smallest practical value. 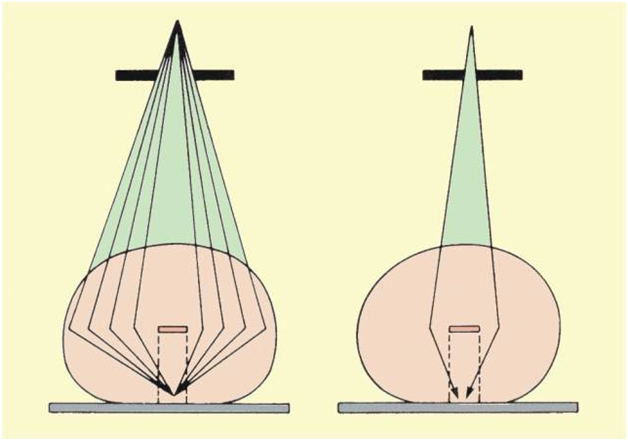 The quantity of scattered radiation in an x-ray beam reaching a receptor can be reduced by separating the patient's body and receptor surface, as shown below. This separation is known as an air gap. Scattered radiation leaving a patient's body is more divergent than the primary x-ray beam. Therefore, scattered radiation spreads out of the primary beam area. The reduction of scattered radiation in proportion to primary radiation increases with air-gap distance. Several factors must be considered when using this method of scatter reduction. Patient exposure is increased because of the inverse-square effect. The use of an air gap introduces magnification. Therefore, a larger receptor size is required to obtain the same patient area coverage. If the air gap is obtained by increasing the tube-to-receptor distance, the x-ray equipment must be operated at a higher output to obtain adequate receptor exposure.

The first step in obtaining optimum contrast in an x-ray image is to adjust the x-ray beam spectrum for the specific anatomy and clinical purpose. The penetration and the resulting contrast of a specific object or structure in the body generally depends on the photon energy spectrum. 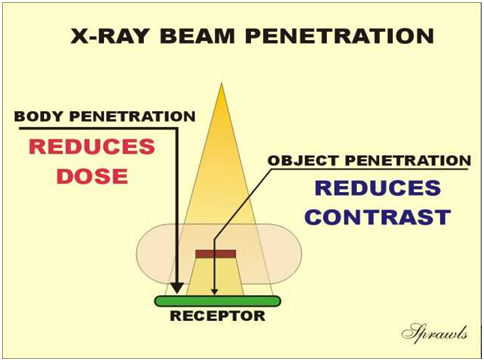 Contrast is not the only thing that must be considered in selecting the spectrum for a specific procedure. The spectrum also affects the penetration through the body section being imaged. This has a significant effect on the radiation dose to the patient. Also, as the penetration through a body section is reduced, the amount of radiation required from the x-ray tube is increased with a resulting increase in x-ray tube heating. We will see examples as we consider specific procedures.